Digility 2017: On the Impact of Extended Realities

It is propbably THE new convention in Germany when it comes to virtual, augmented, mixed and all other forthcoming forms of artificial realities and the technologies that come along with it. About 1,400 people from around the globe came to take part and I had the great chance to join.

For various reasons I didn’t get to write this any sooner, as the second Digility already took place more than two months ago. But it has made a lasting impression on me. Actually I like to think that it’ll become one of those great conventions the city of Cologne will be recognized for within the next five years.

Not really knowing what to expect

Coming from the field of editing, communication and online marketing I was of course looking forward to find out how and in what context this next revolution in digitalization might take place. After two days at Digility I had to wrap up my impressions to this: The future of marketing, communication, social media and even journalism will no longer be centered around words. Instead it might all be about visualized stories. Stories that we will be able to experience with all senses. There is no area in business or private life that won’t be influenced and changed by such »constructed realities«. In my opinion AR, VR and mixed realities will mark the next level of everything. Although I won’t be able to show examples for all of what I saw, I’ll try in the following to give an idea on some of it.

Next level of escapism

First and foremost one might think about the fun aspects of VR and AR. New realities brought to us through special glasses and headphones are going to boost our leisure activities within the next years. Many who have already experienced the magic of putting on a VR glass and earphones probably understand what I mean by »the magic moment of escaping the world around you within just 1 second«. This experience can in no other way be beaten by the one you might have playing a PS game or watching 3D movies. Travelling through the world, riding fast in a roller coaster or becoming part of a breathtaking adventure: All this will be happening in our living rooms. There will be endless ways in the near future using VR and AR to escape the real world around you. 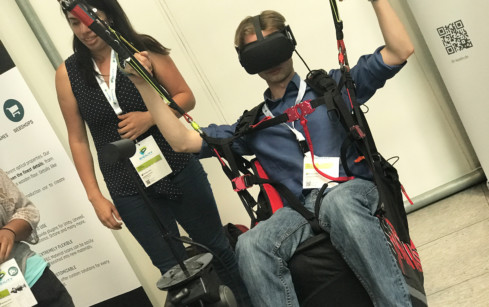 Next level of culture mediation

Thanks to VR and AR we are already and hopefully will be even more able to experience cultural spots which you usually do not have access to or which might not be reached without travelling to the other end of the world. One great example: the dom360.de-project from WDR Innovation Lab. I was really impressed and captured by it. There is this cathedral which you have visited so many times, but a virtual walk through it shows you so many yet unknown aspects … fantastic experience! 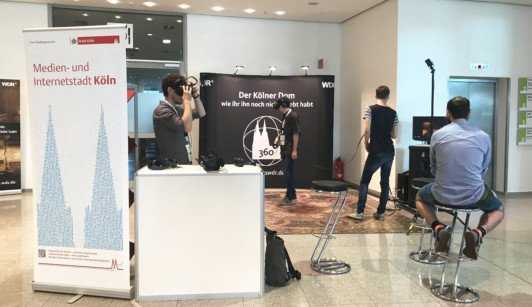 Next level of education and training

I really hope (hope is the last to die) VR and AR will find their way into German schools and into the hands of motivated teachers and other people in the education field who want to embrace the great possibilities that this technology offers to them and the ones they teach. Since this new technology

• motivates kids to explore,
• drives their enjoyment in learning,
• keeps them focused (as in virtual reality kids are less distracted by their right and left neighbours),
• offers detailed information and step-by-step learnings,
• makes it possible that each kid learns along its own capabilities und sets its own pace.

Trainings on the other hand will no longer be based on many words but on showing and having your trainee experience the process of production. Above that any program will be easily translated in other languages in a cost-effective way.

In the very end this might push international cooperation – as cooperating with workforces around the globe is at the core of the whole VR-/AR-business.

Next level of customer experience

An example of shopping in the future is already provided by German tech retailer Saturn. The company toured through Germany this year to introduce avatar »Paula«. The virtual assistant shows you around, gets you to the product you have been looking for and explains to you all of its features. All you have to do is wear the Microsoft HoloLens. Now this will definitely push the PoS to a totally new dimension. 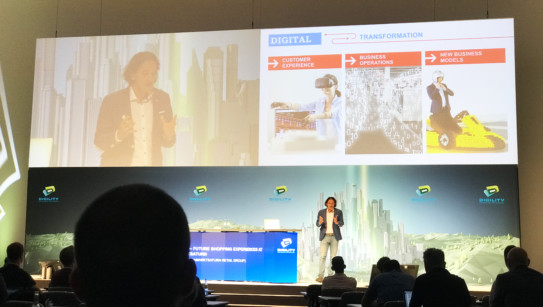 Next level of healthcare

Believe it or not. VR, AR and the technologies that come along with it will give more opportunities than morphine has so far. Applications might even have the lame walk again, as VR technology is able to trick the brain. Jody Medich from Singularity University showed an impressing example for this during her session.

Already in use are virtual reality applications that help people to overcome anxiety disorders or various phobias. It can also support stroke patients to regain lost abilities.

Next level of storytelling

Now this one has been my personal highlight at the conventions exhibition: the Sensory Reality Pod by Sensiks, a start-up from the Netherlands. Within this »box« audio-visual experiences are synchronized with scent, temperature, air flow, tremble, taste and light frequencies. A festival for all your senses so to speak. So I had the opportunity to spent a virtual time out at a wellness hotel in Thailand. »By stimulating all of them [senses] simultaneously and connecting them to a harmonious integral experience, your brain will be activated on multiple points. It makes you feel that you really are in the experience«, describes Sensiks its worldwide first multisensory experience cabin, which is accompanied by a platform for the development of experiences and the distribution of these sensory experience productions.

Rick Roelofs, Account Manager at Sensiks, explains the concept as the following: »By using our Hexagon Controller we are able to measure skin conductance, heart rate and heart viability. Using a headband controller, we can also measure EEG brain patterns. This makes it possible to measure biometrics as well as to let it interact with the experiences. We created a platform to upload, download, stream and play all created content. Creating sensory reality content is relatively easy, once you have the audio-visual material. Using our SDK experience builder, you can simply add the other senses to new and already existing experiences. By creating this immersive and realistic environments sensory reality is used for example in (mental) healthcare, gaming, entertainment, storytelling, events, leisure, wellness, marketing, branding and education.«

Asking Rick to give an example of how all this could be of any use when it comes to market services instead of products – for instance in the finance and insurance industry – he came up with the following idea: »Let’s take a ,green bank’. Have customers ever had the experience where and in what exactly they invest? Probably not! So have him virtually sit in a tractor and let him cruise around. Have him feel and smell and hear what it is like to be a farmer working with his money.« Great idea I’d say. Especially as the concept of »emotional banking« is already on its way.

I guess it is time to rethink the concept of editing in marketing. Instead of telling stories by texts and enrich those with all kinds of visual content, brands and companies will have to find new ways of addressing their customers in the future. In short: Put the wants and wishes of the consumer in focus, not the brand or product itself and let them feel and experience what you up to now tried to communicate by words. Much of this sounds too good to be true? It might for now. But let’s face it: It is the future. And this future is so much closer than we might realise.

Even though constructed realities can be a great supplement, I however agree with Jens Angerer that Mixed Reality or Virtual Reality might also leave us desolated in a bubble of ,unreal reality‘. It is up to the suppliers, designers, politics as well as us, the users, to deal with this responsibility in order to preserve a livable future.

… to organizers and in particular Anett Gläsel-Maslov for awesome speakers, perfect timing, great atmo, reasonable number of visitors and exhibitors, fine food and drinks, the possibilities to come and meet the speakers after their sessions, the international spirit and forthcoming feeling of meeting up with the world in a nice and cozy place to get into the subject AND have the opportunity to dig deeper into the future. It was just about perfect! I write »about« as I learned that VR, AR and MR might push things to a yet unknown level. 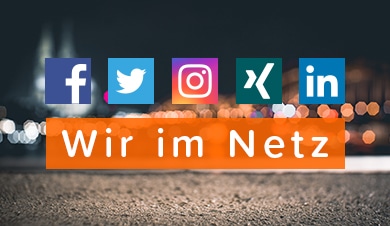